One look at the skyline of south Bethlehem will tell you that it is the home to many churches; their steeples dot the landscape from east to west. Short, tall, single or multi-towered, or onion-domed: they tell the story of the Southside’s ethnic history.

The earliest Southside churches were founded in the mid-1860s, and parishioners worked hard to raise funds to build what have become lasting monuments to their faith. Some congregations met for years in basements they had dug out by hand, gradually building upward as they could afford to, until they were able to create beautiful sanctuaries filled with stained glass, statuary, and paintings that represented each group’s ethnicity and beliefs. Other congregations found temporary homes within established churches until they could afford to branch out into their own buildings. Many of the Catholic churches chose to build their own parochial schools, as well. No matter what denomination, each church developed its own traditions, steeped in the ethnic history of its parishioners.

Although some of the nineteenth and twentieth century structures currently serve secular purposes, today most of south Bethlehem’s original church buildings remain. A number have maintained their ethnic identities, although some experienced transitions in their congregation’s ethnic identity, and even in their denominations, as community demographics shifted and the number of parishioners dwindled. A late nineteenth century Irish church blended with a predominantly Spanish-speaking congregation and a Portuguese congregation in the twentieth century; a German Lutheran church became a Spanish-language Baptist church; an Episcopalian “mission” became the first Russian Orthodox church, which was in turn sold to a Spanish-language Protestant congregation; and an English-language United Church of Christ congregation blended with a Spanish language UCC congregation until the church closed in the early twenty first century…

The churches continue to tell the story of ethnic diversity and demographic change in South Bethlehem. And the numerous impressive buildings, whether sacred or secular today, remind us of the native born and immigrant textile and steelworkers, shopkeepers and professionals, and corporate executives who have lived, worked and worshiped on the Southside for more than 150 years.

To learn more about these churches, please click on the links below. And if you have memories or stories to share about these churches, or others in Bethlehem, or have photos of the churches or people connected with them, please “Contribute a Memory.” It’s easy to upload a picture, or simply type out a story. Help us preserve the memory of these significant institutions in our community!

All Locations on Historic South Side Churches Tour

Locations on: Historic South Side Churches

“A Mighty Fortress is Our God” 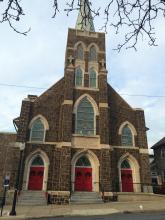 “It was an active church…it was very, very active” –Lorraine Flizar, 2008 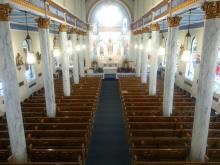 Log in or Register to contribute a memory for: St. Joseph's Roman Catholic Church