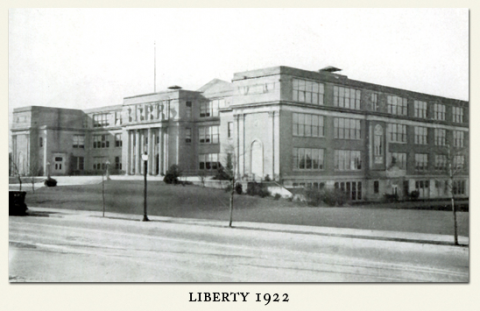 Liberty was renovated in the mid-2000s, and was rededicated in 2009, as a large complex consisting of three academic buildings with modern technologically-equipped classrooms, a refurbished stadium, and the Student Activities’ Center, that includes a cafeteria, athletic department, natatorium, music facilities, and two gymnasiums The original 1922 main building was also fully repainted and refurbished, while the historic integrity of the 1922 marble lobby and the beautiful original auditorium were preserved during the renovation process.

Do you remember "the patio" at Liberty High? Or perhaps you were part of the band? Do you have a favorite memory about a class or a story to share about the school? How about photos? Videos? You can share them on this website! Click on Contribute a Memory, and follow the simple steps to submit your contributions! Let's preserve the memories of Liberty High School!

Log in or Register to contribute a memory for: Liberty High School