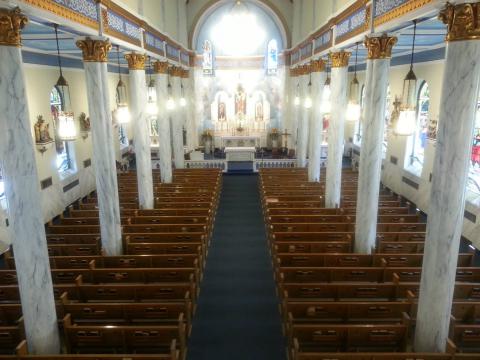 “It was an active church…it was very, very active” –Lorraine Flizar, 2008

Slovenian immigrants came to Bethlehem in the early twentieth century. Having previously worshiped with Hungarian immigrants in St. John Capistrano, the Hungarian parish the Roman Catholic Slovenians desired a parish of their own. When the Archbishop of Philadelphia gave his approval, St. Joseph’s was born. “St. Joe’s”, as parishioners like Vincent Koprivsek affectionately called it in a 2008 interview, was founded in 1913. The Slovenian immigrants built the church building themselves.  In 1914 the cornerstone was blessed, and in 1917 the parish building was complete. They were aided financially by Benedict Birkel, a prominent Bethlehem benefactor and builder, who gave the Slovenians the land and a heavily reduced mortgage rate.

The Slovenians who made Bethlehem their home are uniquely referred to as “Windish”, a term that is both a source of pride and contention. Historically the term was sometimes used as a slur, but now some people have adopted “Windish” as a term of ethnic pride. The Bethlehem “Windish” are particularly from Prekmurje, a region in modern day Slovenia/Upper Hungary. St. Joseph’s is the only existing Roman Catholic parish that was known as a “Windish” parish.

Besides its ethnic origin, St. Joseph’s is also unique for being founded by Franciscans, who were the only religious order in the United States that spoke Slovenian. Coming from the Chicago area, the Franciscans began the ministry at St. Joseph’s and continued until the church closed in 2008. The Ladies of St. Francis (a female religious order) also attended to the parish. In 1926, St. Joseph’s built a primary school. It was staffed by these nuns, and remained open until 1977. It is currently the Lehigh Valley Day Care Center, across the street from the church.

The Slovenian congregation maintained ethnic traditions with their own unique flavor. The Christmas season took on a particularly “Slavic” form, emphasizing somberness in the days leading up to Christmas. St. Nicholas Day, December 5th, a big celebration during the Advent season, was celebrated with tangerines and coal for good and bad children respectively.

In 1988, St. Joseph’s celebrated its 75th anniversary, a Jubilee. Some of the events were once a month evenings of renewal conducted by St. Joseph’s pastor, and a large Strawberry Fest held in June. These were times to reflect on what St. Joseph’s had accomplished and could become.

In 2008, despite protest, including an appeal to the Vatican, St. Joseph’s had its last mass. The Bishop of Allentown closed St. Joseph’s, along with five other parishes, forming Incarnation of Our Lord parish at the former SS. Cyril & Methodius parish on Pierce street.

In 2011, after members of the congregation had appealed the decision to close St. Joseph’s was appealed, the Vatican ordered that St. Joseph’s could open during certain holy days, including the feast of St. Joseph’s in March each year, and for funerals.

In 2011, having successfully appealed the decision to close, St. Joseph's stil remains today. 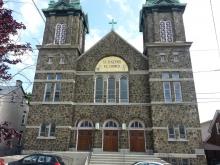 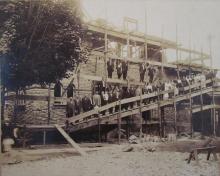 Lillian Horvath discusses the aesthetics of the church building with special attention to the stained glass.

Log in or Register to contribute a memory for: St. Joseph's Roman Catholic Church