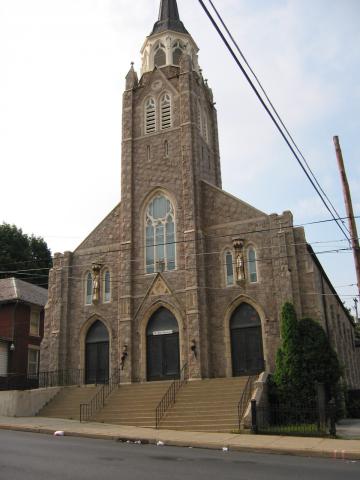 "I just sat there and said to myself, 'This is the last.'  It was sad.  It was the end of an era."--parishioner Margaret Tarola, on the 2008 final mass

What does church membership mean to you?  For the parishioners at St. John Capistrano, the church was a fundamental part of their social lives and a way to connect with Hungarian culture.

From the church's founding in 1903, St. John's provided a variety of services to the community.  In the early twentieth century Hungarian immigrants, not yet entirely conversant in English, saw their parish priest as a trusted advisor.  He could provide advice, in their native Hungarian, about anything from theology to signing legal papers and obtaining mortgages.

Although by the 1980s many of the descendants of the church's founders and new parishioners  did not speak Hungarian and there was no longer a full weekly Hungarian mass, St. John's still provided a center for Hungarian culture that parishioners were drawn to.  "Founders Hall" and the Hungarian Catholic Club hosted dances, Lenten fish dinners, and halushki (cabbage and noodles) and "blood sausage" dinners.  These events, staffed by volunteers from the parish, raised money for the church and created a place where all people regardless of ethnicity or church affiliation could socialize.

St. John Capistrano embraced its Hungarian roots and reached out to non-Catholic denominations in other ways that were appreciated by the parish.  Some parish members fondly recalled Christmas Eve mass at St. John Capistrano when the church invited the choir from the St. John Windish Evangelical Lutheran Church to sing dressed in their traditional Hungarian blouses and vests.

St. John Capistrano enriched its parishioners' lives in many ways, from its ethnic and religious traditions, to daily life.  In 2010 Michael Contakes fondly recalled his days as the coach of the children's basketball team for the church that he and many of the team members, now adults, affectionately refer to as "Hunky John's."  Other parishioners fondly recalled their membership in the Holy Name Society and the activities that it organized, such as trips to Atlantic City, and going to see Phillies games.

When the Allentown Catholic Diocese closed St. John Capistrano in 2008, parishioners were dismayed about the loss of a very important part of their lives.  Appeals to the Vatican to keep the church open were unsuccessful.  The church building has since become part of the Lehigh Valley Community Mental Health Centers, but many parishioners do still think back to the community they had at St. John's.  In 2008, when one parishioner was asked what he missed most about the church, he replied "Friendship."

Did you ever attend a halushki and blood sausage dinner at St. John's?  Do you have stories about attending events at the Hungarian Catholic Club or going on trips with the Holy Name Society?  Perhaps about the friendship and community you had at St. John's?  Whatever your memories about St. John's, we want to hear them!

Dances and Dinners at Founders Hall

I attended SJ Capistrano school Kintergarden thru 6th grade. Remember mass every morning before school started. My Grandfather, Victor Petresky, is one of the founding fathers of the parish.