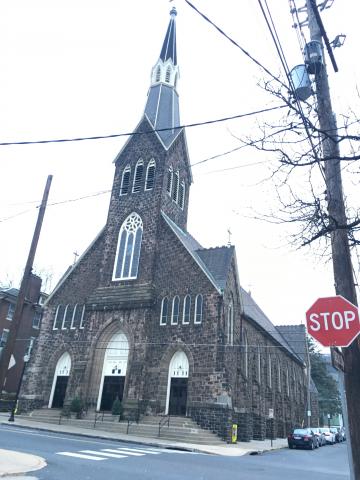 Holy Infancy Founded 1861 "One big happy family. Actually, like three or four in one parish, but it all works out beautifully." --Lorraine Skelley describing the parish of Holy Infancy. Holy Infancy church was founded in 1861, to serve the ever-increasing population of Catholics in the Bethlehem area. Saint John Neumann, who at the time was the bishop of Philadelphia, founded the church on the donated Moravian land. Construction began in 1863 for the Church of the Nativity, which later changed names to Holy Infancy Church. Since inception, the church has a long history of welcoming people of various ethnic backgrounds, and continues to this day. Holy Infancy Church is proudly the oldest Catholic Church in Northampton County. An equal source of pride is the church's ability to blend tradition with the culture of new parishioners. Originally the “Irish church,” today Holy Infancy reflects the changing demographics in Bethlehem. Upward mobility in the post World War II era was one of the main reasons parishioners left the church. They moved to get away from the industrialization. As more Puerto Ricans and other Spanish-speakers came to south Bethlehem after World War II, and more Portuguese immigrants arrived in the 1970s, Holy Infancy opened its doors to them and embraced their cultures and languages. Initially, Holy Infancy held services for Spanish-speaking people in its basement. As the Spanish and Portuguese-speaking portion of the congregation grew, the church began holding regular masses in English, Spanish, and Portuguese. Holy Infancy now even has a "trilingual, multicultural mass and parade" each year. Included in the parade are Irish step dancers and bagpipe players, a Mariachi band, and offertory dancers, which are a sanctioned part of the mass in Mexico. The parade also features English, Spanish, and Portuguese choirs that join together to sing in English, but also sing one at a time in their native languages, an aural reflection of the church’s multicultural make up, and its willingness to blend together and unite people of different ethnicity's. Holy Infancy has not only brought together various ethnicity's in terms of religious practices, it has also served as a place for people to share their culture and personally get to know one another, as well. Church and community festivals at Holy Infancy allow the Spanish-speaking and Portuguese members of the congregation to share ethnic foods with other members of the congregation, and broader community. (Please watch the interview to the right with Mr. Joseph McCarthy for more about festivals and food.) Parishioners can still see the roots of the old church in its architecture, but the church congregation reflects changes that have happened in Bethlehem.” If you want to see the mix that makes up the United States, Holy Infancy is a good place to go,” says McCarthy. 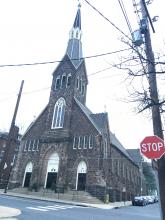 Log in or Register to contribute a memory for: Holy Infancy 312 East 4th Street Bethlehem, PA 18015