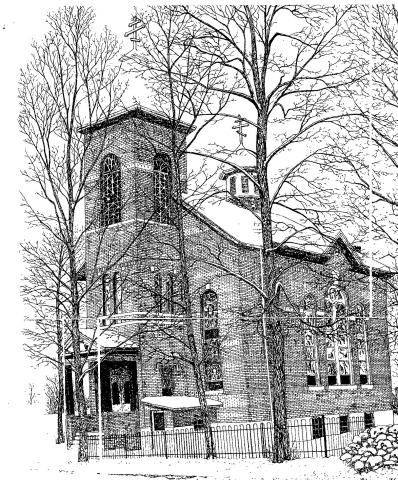 “Oh, we were poor, but we were proud” –Anna Hertz

Christos Razchdaetcya! This phrase, “Christ is born”, was standard, during Christmas, among Russians who attended St. Nicholas’ Russian Orthodox in Bethlehem’s Southside. The congregation was founded in 1916 by the Russian immigrants who had moved to Bethlehem for work. Many members of the congregation had come from the Minsk, Grodno, and Volhynia regions of modern day Belarus.

As required for worship, the church’s building was decorated with icons, holy pictures of Christ and all the Saints. The interior was painted many bright and vibrant colors, and the onion shaped domes sparkled gold in the mid-day sun. St. Nicholas’ stood as a connection between the Russian immigrants and their distinct Slavic culture that they held onto when they came to Bethlehem.

Besides the aesthetics of the building, St. Nicholas’ congregation worked to retain their Russian language and literature. Anna Hertz, a member, recalled in 1978 how the priest and his wife would teach “Russian school” in St. Nicholas’ basement. “We learned Russian reading and writing, [and] we put on plays and recitations”, she recalled. These classes were taught after primary education, and helped to preserve Russian culture for second-generation Russian-Americans.

St. Nicholas’ is named after St. Nicholas the Wonderworker. Therefore it is fitting that the Christmas season, and St. Nicholas’ feast day itself, was so important to the community. Traditionally, following the Julian calendar, Christmas was celebrated on January 7th. The St. Nicholas’ church choir would visit Orthodox families at their homes, singing songs of Christ’s birth, and wishing congregants happiness and health.

Christmas was also accompanied by the Christmas Eve fast. Though perhaps not what one would imagine, the fast included a symbolic twelve course meal, devoid only of meat. As parishioners Ted and Betty Fedora recounted in an interview, the meal began with honey and garlic, symbolizing both the sweetness and bitterness in Christ’s life. After the meal, the Fedoras, like many Orthodox families, attended an evening service.

By the 1970’s most parishioners no longer lived in south Bethlehem, and the congregation had outgrown their original building. As a result, in 1979, St. Nicholas chose to close its first building on East Sixth Street. In October of that year, Metropolitan Theodosius, among other Russian Orthodox bishops, consecrated a new building on Bridle Path Road, where it remains today.

Do you have any photos of the original St. Nicholas Church? Do you have stories of the R club? Contribute them here, and share what you remember of old St. Nicholas'!

Log in or Register to contribute a memory for: St. Nicholas Russian Orthodox Church