On December 18, 1962 Lehigh's Brown and White newspaper ran a short story about the acquisition of the First Moravian Church at Packer Ave. and Webster St. Original plans for campus expansion had the church remaining on the corner, with a Lehigh Chemical Engineering Lab building (later named Whitaker Laboratory) built around it. But this article explains that Lehigh had acquired the church and was going to demolish it, as well as the sexton's house on Packer, and the parsonage, on Webster. The university seems to have announced their plans in bits and pieces, until the originally announced western boundary of expansion stretched well past Butler St., all the way to Vine St..  As the plans gradually unfolded to the public, the "Butler Street project" as the university at first called it, was not a matter of just acquiring land for one science building, but became "slum clearance" for the addition of parking lots, library expansion, classroom space, and more. 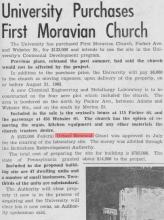