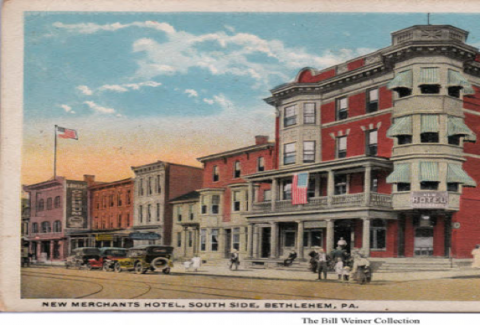 Molly`s Irish Grille and Sports Pub is located on the corner of 4th and New Street and has been located at the same building that houses Campus Pizza and Pantry 1 convenience store since 2010. The corner of the building at New and E. 4th Streets has been a bar since the 1980`s, starting off as Bridgeworks Irish Pub and Grille then switching to Lehigh Pub in 2009. Lehigh Pub only lasted about 8 months until it was taken over by a new owner, who changed the name to Molly’s Irish Grille and Sports Pub. The space was smaller at the time, with a hair salon in another storefront along West 4th St. between the pub and Campus Pizza. The owner of Molly`s then bought that part and knocked down some walls to extend the bar and sell cases of beer, to go.

Before the building was erected, another structure, the New Merchants Hotel, had stood on that corner since the late 1800s. The hotel was taken down as a part of an urban renewal project of the 1960s. An article from the Lehigh Valley Press states, “At the corner of New and East Fourth streets, the New Merchants Hotel, then a “seedy” home of many low-income residents was razed. The block gave way to the Fred B. Rooney Senior Center, a 151-foot-tall, 14-story monolith erected in front of Lehigh University campus, which forever altered the Southside skyline” (1). A postcard, shown to the right, with the image of the hotel, can be found on Beyond Steel, a Lehigh digital project that displays old photographs, postcards, letters, and much more about Bethlehem`s history.

Next door to the hotel, where Campus Pizza and Pantry 1 convenience store now stand, was the site of a popular movie theater. The Lehigh Theater at 20 E. Fourth St. was also demolished for the continuation of the urban renewal project, in 1976. Affectionately known as “The Bughouse,” the theater had several different names over time, from the Lehigh Orpheum Theater during the teens through the 1920s, the State theater in the 1930s, and finally it was renamed the Lehigh Theater by the 1940s.

As local resident Carol Henn said in 2013, when recalling the theater she often visited as a child,

Movie theatres abounded in South Bethlehem, none more colorfully nicknamed than the “Bughouse,” officially named the Lehigh Theatre at 20 E. Fourth St. There you could see movies for 25 cents and, on Tuesday nights, get free dishes. In pre-television days, you could build a fine set of tableware, and South Bethlehem families dined for decades on “Bughouse” dishes, just as they served food from platters advertising Miller ’s Furniture, and poured beer and soda from pitchers advising “Bank on Banko” (2).

This advertisement is for the GALA Week at the Lehigh Theatre, found on the Cinema Treasures Website, which claims the theatre closed down in 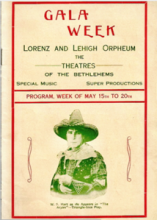 Advertisement from the Semi-Centennial Souvenir 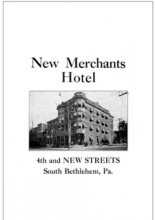 A current view of the block of W. Fourth Street, with Molly’s in the foreground. The New Merchant’s Hotel stood on that corner, with the Lehigh Theater a bit further down the block.

Log in or Register to contribute a memory for: 4 East 4th Street