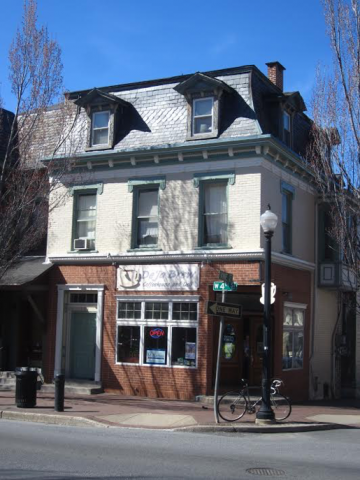 The building currently occupied by the Deja Brew café is located at 101 West 4th Street, at the intersection of 4th Street and Vine Street.  101 West Fourth has historically been set up for potential commercial use on the ground floor with two residential floors built above it.  Typically, owners of the business on the first floor lived above it.  Early records of this location focus on the residential aspect until 1932, when an ad for Rau and Arnold Tailors was placed in the Brown and White newspaper.  This store lasted until around 1939, when it was replaced by Hoffner’s Jewelers, which was originally established at 111 West Fourth.  The address listed in the Bethlehem City Directories changed to 101 in 1939.  More proof of this relocation is an ad for a hair salon located “right below Hoffner Jeweler’s,” that was circulated through the 1940s.  The store changed owners in 1974, becoming Stangl Jewelers, which was in business until 1980.  After that, the building alternated between small businesses, such as The Calililly florist, and residential housing on every floor.  Throughout the history of 101 West 4th, the building’s proximity to Lehigh University made it an ideal place for students to shop, live, and work.  Hoffner’s Jewelers hosted scholarship contests, and The Calililly mentioned Greek life in its advertisements.

However, none of the building’s iterations are as relevant to Lehigh’s culture as its most recent: Deja Brew.  Opened in 1995 by Jeff Vaclavik and his wife Georgeann, Deja Brew started as a coffee shop and expanded their menu as the years went by.  A 2012 interview of the owner and a few patrons shows how the restaurant is viewed as a staple in the Lehigh community, even bringing visiting alumni back to purchase their favorite sandwiches.  Both local residents and Lehigh students truly appreciate the familiarity and “homey” atmosphere of Deja Brew, the latter using it as a meeting place with colleagues or professors.  Vaclavik himself spoke about how he loves raising his son in this environment and interacting with students.

i.     Most of these citations are advertisements which were duplicated for years, so many of the ads sourced here can be found in different editions of the Brown and White.

1994, Advertisement for the open apartment in the upper floors of the Deja Brew building

1990, The first of many small businesses to operate after Stangl Jewelers, this florist mentions that it sells to Lehigh students

1976, Advertisement for Stangl Jewelers, the successor to Hoffner’s 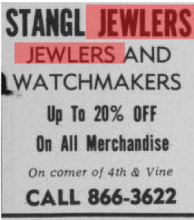 Advertisement for nearby Barber Shop

1949, Advertisement for a barber shop that is located right next to 101 West 4th, supports the location of Hoffner’s

Log in or Register to contribute a memory for: Deja Brew