The year was 1932 and MGM's "Polly of the Circus" was playing at the College Theater in Bethlehem. This was an early "talkie" starring a then-young Clark Gable in one of his earliest roles. Co-starring was Marion Davies. "Convicted", a murder mystery was finishing its run. Apparently, 10 cents got you inside for a movie, a newsreel and some cartoons. The ad also mentions special Saturday afternoon matinees for kids.

Submitted 6 years 1 month ago by Mark. 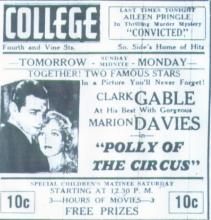