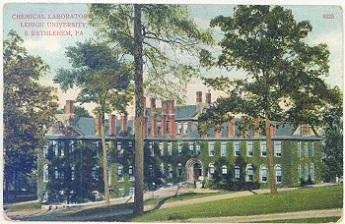 Chandler Ullmann Hall, built in 1884, had a rich history that lent itself to admiration. The building had a history as a not only beautiful landmark on the Lehigh University Campus, but also, as an innovative chemical laboratory. Its original innovative design and purpose, rooted in the aspirations of William H. Chandler, made it a world renowned building that pioneered the movement to learn chemistry in a college classroom or laboratory rather than through an apprenticeship. The exterior of the building, with some additions, has endured in grandeur while the interior has not been preserved in the same manner. Nonetheless, the building’s innovations, accolades, and transformations have defined its distinguished legacy on and off the Lehigh University campus.

William Chandler became Lehigh University’s second Chemistry Department head in 1871 with the goal of enhancing Lehigh’s chemistry department. Assisted by Philadelphia architect Addison Hutton, Chandler wasted no time in planning and designing a new building that would serve as a chemical laboratory.

Construction of the lab took place from May 1884 to September 1885 at an enormous cost of $200,000. The building, made from Pennsylvania sandstone, was built in the shape of a “T.” It contained two main floors with a third floor located only above the center part of the building. The top of the “T” was named the main building and its dimensions were 259 feet by 44 feet. The large Chandler Laboratory housed many rooms, laboratories, and other facilities.

The Chandler Laboratory was a model for chemistry laboratories of its time. Every individual lab was 44 feet wide, as opposed to the traditional lab length at that time of 22 feet. This larger layout for each laboratory allowed for the teaching of chemistry on a larger scale. Another important innovation was the construction of burgundy-colored chimneys aligned on the roof of the Chemistry Laboratory. The asphalt-coated chimneys aided in circulating fresh air throughout each laboratory while removing fumes produced by experiments.

Students at the Chandler Chemistry Lab learned necessary chemical techniques and practices that they needed to work in the booming steel and iron industries of Pennsylvania. Prior to the establishment of the Chandler Laboratory with its philosophy of training chemistry students together, students had trained as chemists by means of apprenticeships.

Chandler Chemistry lab was given recognition for its innovations in 1889 when it received a design prize at the International Exposition in Paris, France. Furthermore, in honor of the monumental building design and Chandler’s many prominent contributions to chemistry at Lehigh, the university trustees named the building “The William H. Chandler Chemical Laboratory” in 1921.

The building underwent two major renovations: the extending of the west wing (1921) and the addition of the east wing (1938). This east wing, named the Harry M. Ullmann wing, was completed in 1938 with a pricetag of $250,000. Dr. Harry Maas Ullmann, a Missouri native, came to Lehigh to teach chemistry in 1914. He served as the chairperson of the chemistry department from 1914 until 1938. In addition to general chemistry, The Ullmann Chemistry Laboratory was used mainly for chemical engineering research laboratories during the time. According to Ross Yates, “the demand for more facilities for chemistry corresponded to the research needs of the department, a large increase in the number of undergraduates taking chemical engineering, and the advent of a graduate program.”

As a part of the building’s 100th anniversary, on March 26, 1994, William H. Chandler Chemical Laboratory became the first university building and the second building overall to be named a National Historical Landmark by The American Chemical Society. This honor can be attributed to the century-long influence that Chandler Laboratory had on the construction of laboratories.

One of the strongest memories of my freshman year in 1956 was that of our Saturday morning chemistry lectures, in this building. Dr. 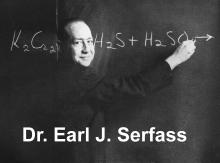 Log in or Register to contribute a memory for: Chandler-Ullmann Hall