This photo shows resident Anna Pongracz in the foreground. A well known community activist in South Bethlehem, she gave a number of impassioned speeches to the City Council, and tried to rally residents to oppose the "blight" designation that allowed federal urban renewal funds to be used to take properties by eminent domain for the "Packer Avenue Project," as it was called by the City of Bethlehem Redevelopment Authority. Her home, shown on the Vine St. page, with Mrs. Pongracz on her porch, was seized by the city after a long battle. Photo by Mary Pongracz

Submitted 6 years 1 month ago by kwc2. 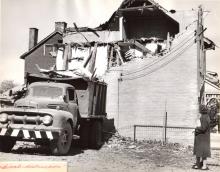