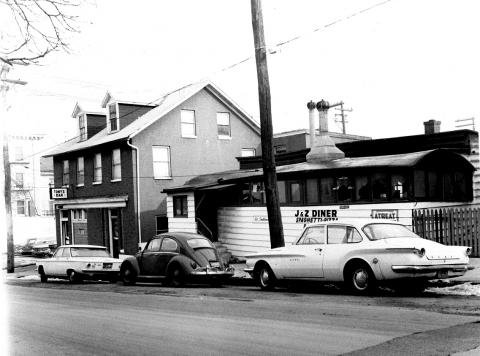 "Third Street was downtown Bethlehem. We had our own city market with all different kinds of vendors, beautiful stores, five and dimes...."
- Bernadette Misero, Former resident

Do you remember Thursday night in the Southside? There were a number of stores in the Southside's vibrant shopping district. Residents recall that Thursday night was shopping night, and Third and Fourth street would be packed with people. Do you remember going to the Kelchner & Roeder Drug store on Fourth Street? How about the M&M meat market and the dry goods store nearby?

Even outside of the shopping district, there were a number of small shops, some run directly out of the owners' homes. Residents recall the tailor shop on Morton and New Street. Others have fond memories of buying candy at the "Mom & Pop's" store on Morton.

Businesses were not limited to stores. Several residents recall trips to visit Doctor Conahan at the "Hospital" on 4th street. One former resident recalls an ill-fated soapbox car race that resulted in a car accident and a trip to see Doc Conahan - luckily, everyone was okay!

The neighborhood dining establishments were extremely popular and many residents have pleasant memories of meals with family and friends at the area's many eating establishments. From sandwiches at the deli at McCrory's 5 & 10 to hot dogs at Gus's restaurant, the eateries were an important part of life in the Southside. One resident remembered Alphonso's Restaurant on Vine Street. Was that in a house? Do you remember the pies Mrs. Alphonso used to bake for the restaurant? Please share those memories so we will know more about this business...and others!

Do you recall playing the jukebox at the Brown and White Restaurant while you and your friends had ice cream sundaes or sodas? Or maybe you remember tilting the pinball machines at Gus's? Perhaps you were older and enjoyed a beer at the New Merchant's Hotel or Berkholdt's tavern. Do you remember the separate lounge for the women at the Merchant's Hotel? Both bars were popular with steel mill employees who often stopped in for a drink with coworkers on the way home.

Did you have a favorite restaurant or hang out spot that you would like to tell us about?

Residents recall that there was always plenty to do in the Southside. The neighborhood offered a number of theaters, each of which had its own unique character.

Do you remember going to the College Theater in your youth? Located at the bottom of Martel Street, the theater played a variety of films throughout the year.

Perhaps you recall the free candy on Saturdays at the Lehigh Theater? Located at the bottom of Rennig Street, the theater was affectionately called "the Bug House" by local residents. The theater charged 25 cents for admission and tried to drum up business by offering free items, such as candy and dishes.

The photo on the right is from the Packer Avenue Project Plan. This 1965 photo shows the J & Z Diner and Tony's Bar on the east side of South New Street.

If you have memories or photographs of the stores, restaurants and theaters from the South Side, please share them with us! You can help us recreate the neighborhood and keep the stories alive!

Log in or Register to contribute a memory for: Local Businesses