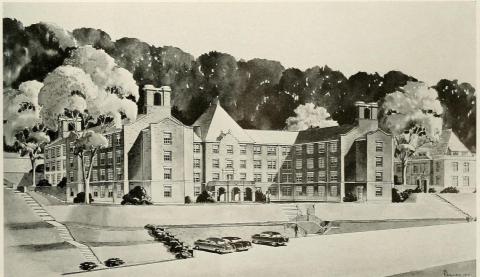 Prior to WWII there was a large increase in enrollment that the university could not handle. When the war started in 1942, there were 1,780 undergraduates at Lehigh, and by the end in 1946 there were 2,723 undergraduate students enrolled. While the university welcomed the boom in enrollment, the infrastructure could not support it. There were only a limited number of beds in the dormitories and the enrollment class exceeded that amount. First year students were given the freshman dormitories and then the seniors and juniors were given priority on picking the remaining housing options. This left the sophomores to fight over what was left, which was not much. This housing shortage became known as the "sophomore squeeze." The men had to rent rooms in Bethlehem or had to move into temporary dormitories that were essentially Quonset huts and received the nickname "tempos."

In order to alleviate this housing shortage the construction of a new dormitory was proposed. In 1954, the Packer Hall-Dormitory Campaign was enacted to raise enough money to build a new dorm and renovate Packer Hall. Construction for this new dorm began in 1955 and two years later, in 1956, the McClintic-Marshall House was opened. For a year it remained nameless, receiving unofficial nicknames such as “Dorm X” and “The New Dorm.” The administration then decided to dedicate the building for two alumni from the class of 1888, Howard Hale McClintic and Charles Donnell Marshall. Lehigh’s president, Martin D. Whitaker, stated at the opening of the building that "the name is in recognition of the loyalty of the sons of Lehigh."

These two men were both skilled in civil engineering and in 1890 they collaborated on a steel-manufacturing firm, Shiffler Bridge Company. After the loss of this company, they opened the McClintic-Marshall Construction Company in 1900. This company developed into the world’s largest independent steel fabricating firm. Some of the firm’s most famous projects include the George Washington Bridge, Grand Central Building, and the Waldorf-Astoria hotel. The company’s most notable project was its work on the Golden Gate Bridge in San Francisco. In 1931, the McClintic-Marshall Construction Company merged with Bethlehem Steel.

Although the name of the McClintic-Marshall Construction Company faded, the names of these two Lehigh alumni are forever memorialized by the building that stands on Lehigh’s campus. While the building was an ode to both men, it is important to note that neither of the two alumni were alive to see its construction or opening. Just like Lehigh, M&M has changed and developed since it opened in 1957. It has been modernized and upgraded to accommodate students’ needs.

Many renovations have transformed M&M in since 1957. In 1980, the university gave new furniture to six dorms, including McClintic-Marshall. The university spent $30,000 on this new lounge furniture. Two years later, in 1982, the university constructed general improvements in many dormitories. These upgrades included lounge furniture additions, more carpeting, and outdoor seating. The specific renovations that were completed in the McClintic-Marshall House were painting and door refinishing.

McClintic-Marshall House underwent its largest renovation in 2009. One of the greatest improvements involved the showers. The plan was to expand one shower every year by removing the adjacent bedroom and building into that area. Although the upgrade of the showers was nice, most residents of M&M believed that the more important renovation involved air conditioning. In this 2009 renovation, the residence hall was bestowed the blessing of air conditioning and, as of 2014, was the only freshman housing that has this luxury.

Log in or Register to contribute a memory for: McClintic-Marshall House