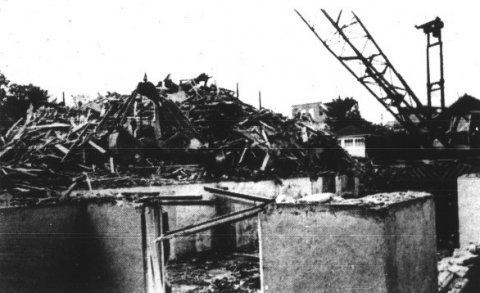 "This wasn't just a bunch of historic buildings...this was a neighborhood, where people lived and cared about each other." -Mary Pongracz

How and why was this neighborhood lost? During the 1950s, Bethlehem’s the neighborhood between Packer Ave, Martel, Morton and Webster Streets was a bustling community that was home to local families, small businesses, two schools, and communities of faith, and it surrounded a growing Lehigh University that was contemplating expansion. In the early fifties, Lehigh began its expansion by purchasing land in the neighborhood using “straw buyers”—for example, the secretary at the university’s law firm—to obscure the university’s interest in acquiring land for expansion and keep property-owners from raising prices. Throughout this time period, the federal government’s urban renewal plan encouraged cities to promote development through the acquisition of blighted properties and their subsequent demolition and redevelopment.

Urban renewal provided a potential mechanism for university expansion at Lehigh. By the late fifties Lehigh had acquired a critical mass of local properties and the City of Bethlehem agreed to request federal urban renewal funs to acquire the other homes in the neighborhood. Vague federal guidelines required cities to identify targeted areas as “blighted” before they could receive federal money for “slum clearance.” Taking advantage of this vague designation, the city condemned entire blocks by identifying just a few properties on each one as evidence of urban blight. Residents recall that many of the rundown properties had been acquired by the university early on in its expansion planning, and had been neglected, with peeling paint, overgrown weeds and bushes, and broken sidewalks. Homeowners, led by businesswoman and Vine Street resident Anna Pongracz, spoke out at City Council meetings and accused the university administration and trustees of deliberately seeking the “blighted designation” for the city blocks needed for campus expansion.

As the project unfolded into the early 1960s, some residents fought to save their homes and the neighborhood from acquisition through urban renewal while other property owners were happy to sell their homes. Once houses were condemned and families had moved, demolition workers tore down both run down properties and well-maintained homes, gardens, and yards at a rate of five houses per day. Lehigh University has gradually filled the footprint of the Lost Neighborhood with new classroom buildings, laboratories, a library, parking lots, a parking garage, and student apartments. Meanwhile, in a major shift of priorities, the current university administration has developed a strategic plan that significantly changes the course set out by officials in the 1960s and identifies “Partnering in the Renaissance of the Local Community” as one of its four strategic goals.

We invite YOU to partner with Lehigh public history students, to tell the history of the vibrant neighborhood that was lost as the university expanded 50 years ago. If you have memories or photographs of the Lost Neighborhood please share them with us! You can help us recreate the neighborhood and keep the stories alive!

Photo Source: The Brown and White 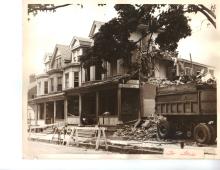 Log in or Register to contribute a memory for: Demolition