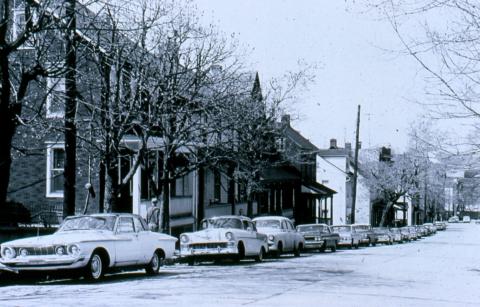 In his backyard he [Henry Kelly] had chicken coops and homing pigeons… when the family would come back to visit with them, what he would do is take one of the homing pigeons and put it in a cardboard box and let them take it home with them. And when they arrived back home, they’d release the homing pigeon and it would fly back letting them know they had arrived safely. This is before cell phones. John Hughes, Jr., Lehigh University Graduate and genealogist

A story about homing pigeons may not sound like a scene from the Adams Street most residents remember. It is a story about an Adams Street family, the Kellys, that was uncovered by John Hughes while he was researching his wife’s family history. Through his research, Hughes has painted a picture of what Adams Street was like in the early 1900s, when immigrants were pouring in from all over Europe to work for the steel industry and other industries. Henry Kelly, whose family came from Ireland, was a superintendent for the Halcyon Knitting Mill located at 328 Birch Street (renamed Adams Street). He was also a member of the 3rd Ward Democratic Club and served as president of the Liberty Fire Company. Henry and Anna Kelly raised twelve children at 425 Adams Street. As the children grew up, many remained in the Lehigh Valley. In fact, a daughter and granddaughter lived just next door and remained on Adams Street after Henry and Anna passed away in the 1940s.

The Kelly family likely saw many changes to the neighborhood over the years. It is possible that their descendents remember the old family home being torn down to make room for Lehigh University’s expansion. However, their story is just one Adams Street story. It is our intention that this tour will become a collaborative forum where residents of the Lost Neighborhood can contribute their memories, so if you have photographs or memories of Adams Street, please share them with us!

Another View of Adam's Street

In picture is another look at Adam's Street, this time in the winter. 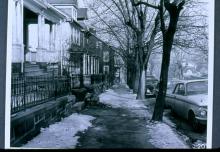 The Theta Xi Fraternity house was located at 470 Adams Street. In photo is a view of the front of Theta Xi with several fraternity brothers enjoying the day on the porch. 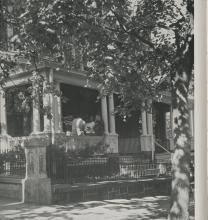 Log in or Register to contribute a memory for: Adams Street