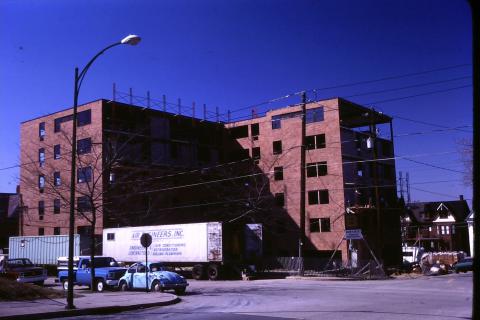 By 1966 the City of Bethlehem acquired the last of the homes in the Lost Neighborhood through purchase and eminent domain. By 1967, the demolition of the homes in the Lost Neighborhood was complete and construction began. In 1967, Lehigh University started construction of the Mart Science and Engineering Library. Parking lots were created on the northern border of the former neighborhood, along Morton, between Vine and Webster Streets.

Some former residents recall being upset that the University built only parking lots where their homes had been. The parking lots, considered "temporary measures " while Lehigh developed plans and financing for the entire Lost Neighborhood area, remained undeveloped for 35 years until the northern border of the urban renewal zone was filled in with new university buildings .

Before the urban renewal project the University had created the Centennial Fund, a portion of which was intended to finance the construction of new buildings and the renovation of existing ones. By 1968, fundraising enabled the construction of an arts and sciences building, Maginnes Hall, and the Sinclair Research Laboratory. Legal issues and construction strikes delayed progress on these buildings, and they were not completed until early 1971.

Fueled in part by the University's decision to become coeducational in 1969, the University built the Lower Centennial Dormitory complex. The structure is located a few hundred yards southeast of the Lost Neighborhood area, behind Grace Hall. Construction was completed in 1971. The Seeley G. Mudd Chemistry Building and Neville Hall were next, built where Butler and Rennig Street had once run north from Packer Avenue; construction of both was completed in 1975. In 1979, the Brodhead House residence was erected where the College Theater once stood. The photo on the right shows the construction of Brodhead House in 1978. (Photo provided by Steve Cutcliffe.) Construction in the former neighborhood continued into the following century.

In 2002, the University built the Campus Square complex, finally replacing the “temporary” parking lots that had lingered for 35 years at the northern edge of the Lost Neighborhood area. This complex brought new life to the site where homes had once stood, with apartments for 244 students, a small plaza and shopping area with the University bookstore, a restaurant, ice cream parlor, and an outdoor square in which a public farmer’s market is held weekly 5 months of the year.

In 2011, the ultra-modern STEPS (Science, Technology, Environmental, Policy and Society) Building was built where Gus's Restaurant used to be.

In 2007, the Bethlehem Area School District started construction on a replacement for the aging Broughal Middle School. The new building, designed to accommodate 900 students, boasts a greenhouse, planetarium, and family center. The new Broughal school was built along Morton Street, on the playing field that had been created after the neighborhood between Brodhead and Vine Streets was demolished through urban renewal in the 1960s. When the new school was completed in 2009 one more piece of the Lost Neighborhood, the historic Broughal Middle School building on Packer Avenue, was demolished and the new school playing field was developed where the old school had stood. The modern playing field is sandwiched between Brodhead Street and a short, nondescript alley. The alley is all that remains of the 400 block of Martel Street --a mere remnant of the Lost Neighborhood.

Log in or Register to contribute a memory for: Construction