On University Day in 1869, William Bacon Stevens, Bishop of the Dioceses of Pennsylvania and President of the Board of Trustees of Lehigh University, reflected on the founding of Lehigh University by the Honorable Judge Asa Packer (1805-1879) with a gift of $500,000 and the first meeting of the Trustees on 7 July 1865 at the Sun Hotel in Bethlehem, Pa. He writes, "To the large gift of money, Judge Packer now added the gift of fifty-seven acres of land- the great body of the domain on which the university stands. To plan out the buildings, to frame a system of instruction, to organize a corps of professors, occupied many anxious days of thought and conference." (Stevens, Origins and Aims, 14). Stevens describes the process of selecting a president and faculty, the purchase of Christmas Hall [today Christmas-Saucon Hall], and the laying of the corner stone of Packer Hall in 1866. He contemplates then upon the alterations made to the hillside as the university was under construction. He continues, “What a marvelous change has been wrought in three years! The forest which five years ago had not a house; has now been transformed into this University Park. It is almost as if the wand of a magician had been over this hill side, and lo! there had sprung up a beautifully planned campus, elegant dwellings, and this edifice, named after the founder, Packer Hall, the finest and most admirably arranged single college edifice in the land…” (Stevens, Origins and Aims, 16). What would Bishop Stevens think of the hillside now!

This tour tells the story of Lehigh University explored through the campus’s buildings with the intention of collecting the memories of Lehigh’s students, staff, faculty, and the community of South Bethlehem as it ties to place. It further examines physical relationships of the town-gown as the university expanded down the hillside of South Mountain and the interplay between the factory and university.

Share what happened among these hallowed halls. Did you fall in love? Did you find that group of friends that will have your back always? Did you find the perfect study spot? Do you remember the last game played at Taylor Stadium, the original path of the Bed Races, or when the university had not yet expanded beyond Packer Avenue?

All Locations on Lehigh University Tour

Log in or Register to contribute a memory for: Alumni Memorial Building 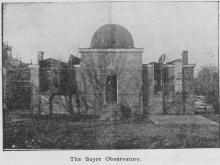 Log in or Register to contribute a memory for: Astronomical Observatory

Log in or Register to contribute a memory for: Campus Square/Farrington Square